Assam is a charming land with heart warming people. It is a wonderland of enchanting beauty and excitement, a Green Paradise. It contains so much beauty and depth that a nature lover is held spellbound. Department of Environment and Forests is commited to showcase this charm and wonder to the people of the world. This activity has the potential to generate tremendous tourist movement and business potential. Assam also has the advantage of being the gateway of the nort east India.

Sprawling at the foothills of the Eastern Himalayas, Assam has a long and colorful history dating back to the Vedic ages. During Mahabharata age, it was known as Pragjyotishpur (The Land of Eastern Light). In the Puranas and Tantras, Assam was referred to as Kamrupa- the land where Kamadeva, the demigod of love, was reborn.

It was during the Varmana dynasty that Assam was chronicled in the SI-YUKI, the famed travelogue of Hiuen-Tsang, a Chinese pilgrim. After the 600 years’ Ahom-Kingdom, Assam became part of British India in 1826 and then a constituent state of Independent India.

Assam has been a melting pot of various racial stocks, viz. Indo-Burmese, Mongoloid, Austro-Asiatic, Aryan, Dravidian etc. The state is inhabited by a large number of tribal groups; viz. the Boro-Kacharis, the Deori, the Misings, the Dimassas, the Karbis, the Lalungs, the Rabhas etc. Ahkhomiya or Assamese is the lingua- franca of Assam.The state has a reputation for warm hospitality. People are homely, charming and openhearted.The small and serene hilly villages shelter the lovely people, warm and fascinating and as colourful as the land itself. They robe themselves in the choicest cloths, which are blended on their tiny looms. 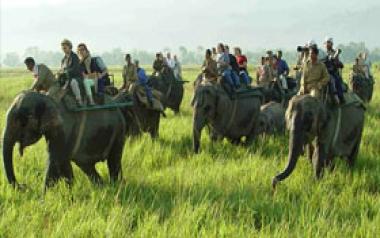